Joe Rubinstein was born in Israel. He emigrated to the U.S. at the age of 5 years old. His cousin had a bunch of comic books and Joe naturally was fascinated by them. Joe wasn’t speaking the language at the beginning and he was fascinated by the pictures. Like all kids, he drew his own comics. That was the start! Eventually he wanted to be an artist. At age 11 he attended classes at the Arts Students League of New York. His art teacher Arthur J. Foster, son of the great Hal Foster (creator/artist of “Prince Valiant,” one of the most highly regarded comic strips in history) was his first mentor.

Finally Joe Rubinstein became one of the greatest inkers in comic industry and he appears in 1029 comic issues! Joe is also an award-winning portrait artist and illustrator. his drawing ability is extraordinary and we see that in all of his work!

Joe Rubinstein took some time from his busy schedule to answer some questions giving us some insight about life, drawing, people …inking.

Q: Hey Joe! How are you? We know that your comic story is pretty …long! So, let’s go back in time! Do you remember you first professional work? Do you actually remember the first piece you did as a pro and when did you do it? Could you tell us the history behind it? 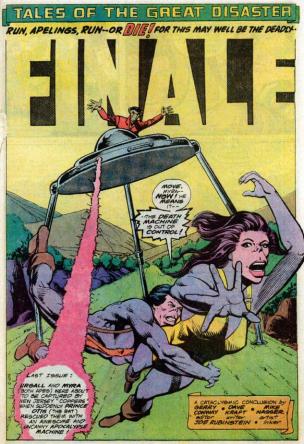 Joe’s first solo job:
Tales of The Great Disaster in the back of Kamandi

Joe: My first solo job was appropriately enough called Tales of The Great Disaster in the back of Kamandi. Mike Netzer / Nasser had drawn some samples and I asked him if I could practice on copies of them and he said to go ahead and ink the real thing, so he got this 6 pager to draw and then I was assigned the inking. I was 17 and I think Mike was 20 years old.

Q: You said from time to time that your idol in the past was Neal Adams. Then you met in your inking career many artists. Who is the person that had the biggest influence on you and your comic work? Did this person change your work or the way you draw?

Joe: Working at Continuity studios when I was 13 (running errands) the guy who paid attention to my needs and taught me was the great Dick Giordano Adams couldn’t be bothered with teaching except for the occasional turse word or two but I did look through the files that he studied from and I learned from those people. That’s why my work looks like his. We learned from the same artists. To whatever degree I actually know how to draw that came from life drawing classes and studying with many artists.

Q: We see that you have a unique style of inking – at least many people state it. We bet that your style became unique while you have inked more pencillers than any other inker! 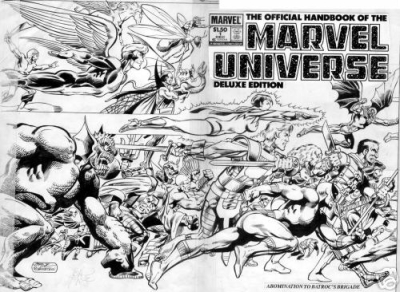 Joe was doing on and off for 20 years
The Official Handbook of the Marvel Universe.
Here you see the Deluxe Edition #1 Cover

Joe: Sorry to disagree with you but I think my stuff is very much into the Stan Drake / Holdiway / Drucker illustrative school of inking, unless I make a decision to ink differently. I am a little different from most inkers because I change my approach and my tools depending upon the style I’m inking. I don’t want to “take over”.

When I’m done I wanted the work to look like the penciler’s work I respect, just a better version of that art work or at the very least do no harm to it .I learned this philosophy from Dick Giordano. I think I was given The Official Handbook of the Marvel Universe to do on and off for 20 years because I could accommodate everyone’s style but at the same time give it a certain amount of cohesion in style.

Q: Do you really hold the Guinness record for it! How did that happen? Do you believe that attending the Arts Students League have a main role for inking so many pencilers?

Joe: The Guinness record if it existed which it doesn’t. I made a joke about that one day and it stuck. Going to the Art Students League of NY was very important for me to start learning to draw from life but I’ve also studied with a lot of very great prominent mostly East Coast artists privately and in other schools. I am currently attending 3 classes a week.

Q: Which artists or creators do you return to for a quick boost of inspiration while you have some numb periods? Who do you think that are the masters of ink?

Joe: Stan Drake, Kubert / Drucker / Janson / Williamson and many others I’m sure I’ve forgetting. Ink Masters would be Gibson, Goodwin, Flag, ER Kinstler Rembrandt, Michelangelo, Heinrick Klee. I don’t know any of their work shows up in mine but they certainly are inspirations.

When Joe is bored with inking he paints
watercolors or pastels. Lola’s portrait!
Collection of Mr & Mrs Chris Stamp (manager of The Who)

Q: What do you do to recharge your batteries and reach a state of mind in order to place your hands back on the paper?

Joe: Don’t forget I don’t do much penciling  but when I’m really just bored with inking and B&W I paint a watercolor or  pastel  or something in color just to challenge me and wake me up.

Q: What tools do you use to create your work and what makes them the “right tools” for you? Let us know if you have a favorite brand of ink or type of paper or a particular material.

Joe: I have 3-4-5 different kind of pens I use and 2-3 different kind of brushes in different sizes depending upon the style that I’m trying to achieve. I use flexible pens for one style and a stiff pen for another. I use thin ink for pen work and thicker ink for brushwork never mixing the two. Something a little unusual I do is shave/whittle the back of the brush and attach the pinpoint to that end of the brush to give me a really firm natural grip.

I use comic book paper for watercolors because it’s tough and I happen to have it around.

Q: What element of your work gives you the most personal satisfaction?

He’s painting and drawing portraits and figures
trying to get some sort of emotional communication. Stan Lee’s portrait.

Q: What has been the most rewarding project in your career so far and why?

Joe: I guess that would be The Official Handbook of the Marvel Universe because I got to work with so many great pencilers and people who never pencil for anybody else (Kubert, Bolland / Severin, Drake, Palmer etc.). I also did a Bible story with Rick Leonardi I was very proud of and three-part Tangled Web of Spider-Man with Lee Weeks. I’m also very happy with the BRILLIANT issues with Bagley. Currently I’m inking a series called One Minute Later for a private collector. I’ve done something between 20 and 30 of them and have gotten to ink a lot wonderful artists and a lot of wonderful interesting pieces.

Q: Let us know about any current or any upcoming projects.

Joe: I just finished inking half an issue of the Fantastic Four with Mark Bagley and also with Mark a series for Marvel/Icon written by Brian Bendis called BRILLIANT. I’m doing a graphic novel about children with cancer called Nistar as well as an 8 part indy series called Murder Mysteries. I’m also doing a Superman movie related project at this time.

Nistar is a graphic novel about a superhero for children with cancer written by
Shira Frimer and illustrated by Josef Rubinstein and other comic book artists!
The first creator-owned book by ULTIMATE SPIDER-MAN co-creators Brian Michael Bendis and Mark Bagley,
BRILLIANT tells the story of a handful of college-age geniuses who challenge each other to solve the mystery of superpowers.
Inking by Joe Rubinstein.

Q: We’ve all met very talented newcomers –or not – who are working their asses off but still need and want to break through to the next level. What would you suggest to them? What’s the best advice you’ve ever heard given to a promising new creator?

Joe: Find a mentor, become an apprentice, learn your craft, study what’s been done before, look at what they are buying now, look at other sources of art, don’t limit yourself to comic books. Stay current with technology.

This is it Joe! Thank you for your time!

29 thoughts on “JOE RUBINSTEIN – the Inker – the Artist”