In my quest to find independent comic book creators for this segment, I was introduced to Jon Towers. A friend of a friend, of a lot of friends, we both have ties to the indie horror and comics community, me as a writer and him an artist. In certain corners of the internet, Jon is known as a jack-of-all-trades: A comic artist, a wrestler, and the host of his own podcast, Red Horse Radio (http://redhorseradio.com/). With his larger-than-life characters and genre-bending storylines, originally based on his own experiences during his time in the army, Jon is known for his distinctive series of self-published and indie press comics. It’s safe to say that not many out there know of his work, but it’s definitely hard to forget once you do.

Currently working on his latest graphic novel, coming from Post Mortem Press (http://www.postmortem-press.com/) in 2015, I recently got the chance to catch up with Jon about his projects. 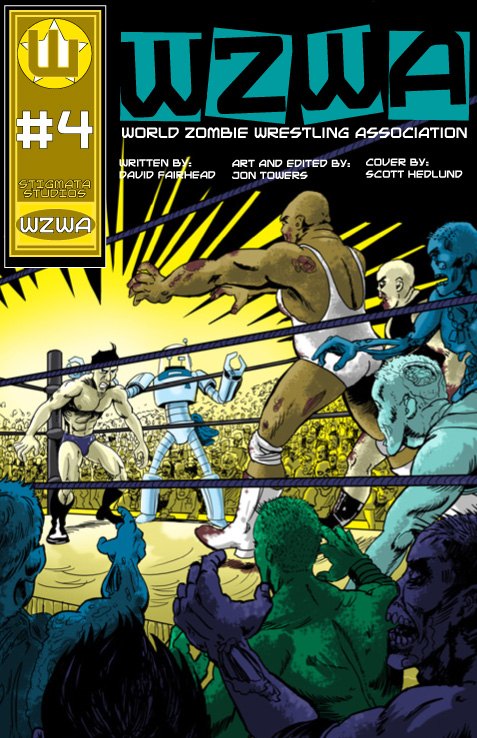 Q. Your comics feature a pretty unique mix of genres and themes, from horror and action to sci-fi and fantasy. I’ve not really seen books quite like this in a while, since my days roaming for indie/self-pub comics in the late 90s. Can you tell us a bit about your world and your characters?

A: I can see how it might appear a little schizophrenic. Every story or chunk of narrative is all stomping towards the story of the end of the world. There is this unseen tyrannical God who acts by using these Old Testament Archangels. There are these different secret societies of zealots and magic users, and in the middle is this group of quirky heroes called The Nonstandard Assembly. You know, one guy is a World War II era war-bot, there is a Kabbalistically-animated stone golem, a serial killer, a bad-ass female detective, and the list sort of goes on.

Q. What are some of your influences when it comes to comics? Do your stories come from outside sources, or do you draw a lot of inspiration from personal experience?

A: Well, My big art influences are Edward Gory, Walt Simpson, Kevin Eastman, and Kevin O’Neill. As far as the stories, there are some personal experience in there. I feel like the things that are intrinsic to my stories are; myth, religion, history and as much action I can pack in there. The older stories were very personal, then as the universe opened up it got a little less personal I guess.

Q. When did you first decide to get into comics? Was that the first logical step for storytelling, or did you have other ideas for how to get your work out there?

A: I have always done comics. Last year I found a comic adaptation of Melville’s Moby Dick I drew when I was 7. In 2003 I started posting work as a web comic. My big plan was then to get everything together and self-publish a graphic novel. Which I did! My big print debut was like this 300 page graphic novel! I then shifted to self-publishing more standard sized issues. And I trudged along that way for a long time. Today I am happy to be working with Post Mortem Press who is going to publish my graphic novel, The Djinn Jihad, in 2015. There are so many great new media options and way to combine media to tell these stories. I have tinkered around with writing pros and even screenplays. It is all fair game, but comics seem to be for me.

(This is my Moby Dick comic for your viewing pleasure: http://stigmataverse.blogspot.com/2012/03/moby-dick-comic-adaptation.html)

Q. Did you ever want to get into mainstream comics, or do your allegiances lie squarely with indie comics? 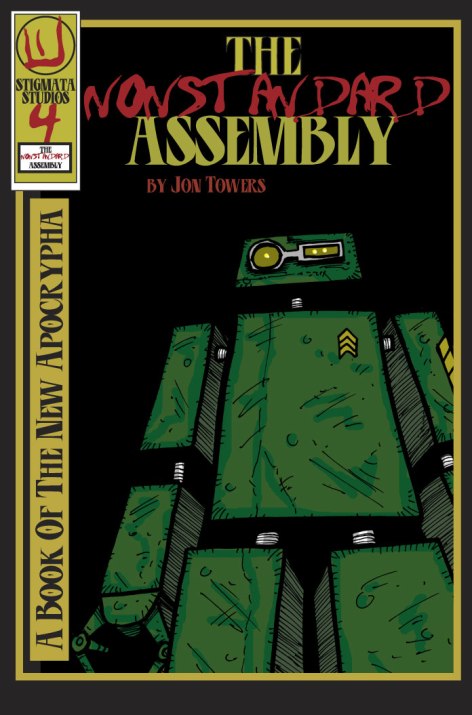 A: When I was young ALL I wanted was to work in mainstream comics, not saying that if I had the opportunity to I wouldn’t do it today. However I feel like the stories I am telling today and the style I am using to tell them are totally 100% indie. My final answer is; I ride or die Indie.

Q. Besides your comics, you’re a wrestler, an illustrator, a designer, and you have your own podcast. It’s fair to say you’ve got a lot going on. How do you balance all of your pursuits?

A: It’s all time and asset management! Ha-ha-ha! No seriously something had to give so I recently gave up Indie Pro-Wrestling. My last event was pretty cool one of the promotions I worked for Mega Championship Wrestling inducted me into their hall of fame. Luckily Red Horse Radio doesn’t take up too much of my time. I am pretty focused on the comics right now.

Q. You’re a pretty busy guy. Do you have any projects on the back-burner? Any new stuff in the works?

A: The Djnnn Jihad graphic novel from Post Mortem Press, I have really been spending all my time on it. The idea is, if a group of terrorists sneak in a magic lamp instead of a suit case nuke and let a genie loose in a city. So here there is plenty of myth, religion, a little history, some current-ish events, and lots of action.  And there is going to be tons of web based exclusive content to expand the story as wide as any normal person can take. I am really excited about the project all together. I also have a full-page comic in every issue of the magazine Jamais Vu – Journal of Strange among the Familiar. My comic is called The Whiskey Rebellion and it has been a lot of fun to do.

Thanks to Jon for taking the time to talk about his work. If you’re looking for more on Jon, you can find his earlier comics here at his website jonnyaxx.com.