With its fourth issue, this 80s action-adventure romp comes to a dramatic close, ending this enjoyable flashback on an overall high note. After Logan’s apparent death at Alex’s hands, the spy/mercenary Quark uses her blooming romantic relationship with Alex to lead him to India and directly into the clutches of General Meltdown. In this issue we learn that this globe-trotting journey has been a complex rouse created by Meltdown and Doctor Neutron, meant to pit Alex against Meltdown so that the general can absorb Alex’s devastating radioactive blast. Logan, however, has other plans.

After being buried in a shallow grave, Logan comes back as Alex predicted thanks to his healing factor. From there he follows the staged clues left behind by Quark to arrive in India, at the power plant meant to serve as the stage of General Meltdown’s ascension into untold levels of power. Led by Quark, Alex believes that he’s rushing into the plant to avoid an impending meltdown, and is instead met by Meltdown. Dramatic monologues ensue as Alex squares off against the power-hungry mutant, as Quark (still masquerading as Scarlett) is wounded in the skirmish. Fueled by heartbreak and rage, Alex unleashes a massive blast on Meltdown, playing right into Meltdown’s hands. 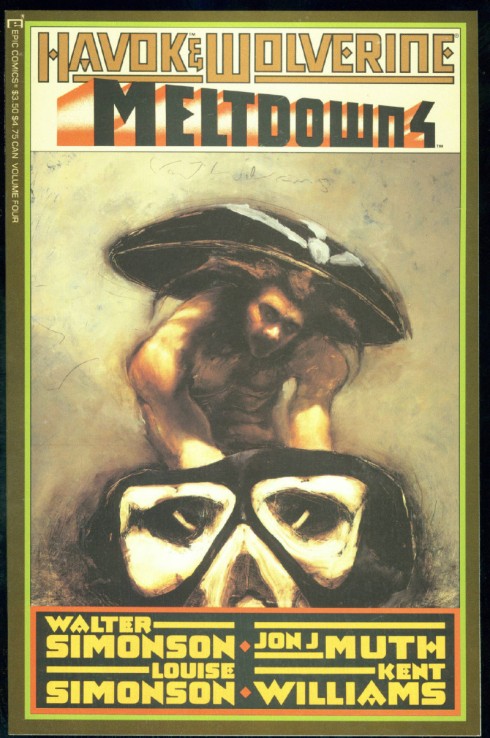 Just when all seems lost, Logan arrives to stop Meltdown, piercing him with a slew of control rods as to dampen and wither his powers. Still channeling excessive levels of power, Alex redirects the radioactive onslaught up and into space, sparing the plant and everyone inside. With Meltdown dead and Scarlett seemingly lost in the crossfire, Logan and Alex make their escape to Bombay, taking a moment to breathe as their adventure comes to an end. In the epilogue we see Neutron plan for the future, quickly overcoming this setback to move onto the next big scheme at the expense of the world’s superhero community.

Overall this was an enjoyable series, with plenty of twists and turns and amazing art to boot. In this closing issue Muth and Williams deliver a visually exciting story, with explosive action sequences in the Alex/Meltdown showdown and dramatic page design. The use of color was especially affective here, with lovely golds and earth tones against eerie blues and greens to explore the interior of the plant. This book is just unquestionably nice to read, providing a consistently engaging visual experience from start to finish. I wish I could say the same of Walter and Louise Simonsons’ scripting. While definitely fun, this issue in particular really suffers from the overuse of cliché dialogue and exchanges between Alex and Quark so sugary-sweet as to induce a diabetic episode. I have to give the Simonsons props for an entertaining plot for Muth and Williams to capitalize on, but the dialogue is often so bad that I had to laugh, and not in a good way. For all the soft spots, Havok and Wolverine: Meltdown is still a highly entertaining nostalgic trip to the comics of a bygone era.

One thought on “Retro Comics: Havok and Wolverine: Meltdown #4”