During the 1880 Christmas season, Thomas Edison strung a line of electric lights outside his Menlo Park, N.J. laboratory, enchanting travelers on passing trains. And on December 22, in 1882, Edison’s partner in the Edison Illumination Company, Edward H. Johnson, hung the first string of 80 electric Christmas tree lights, an Edison’s creation, from a spinning tree it the parlor of his mansion!

This is the first time that the Christmas gained their lights! 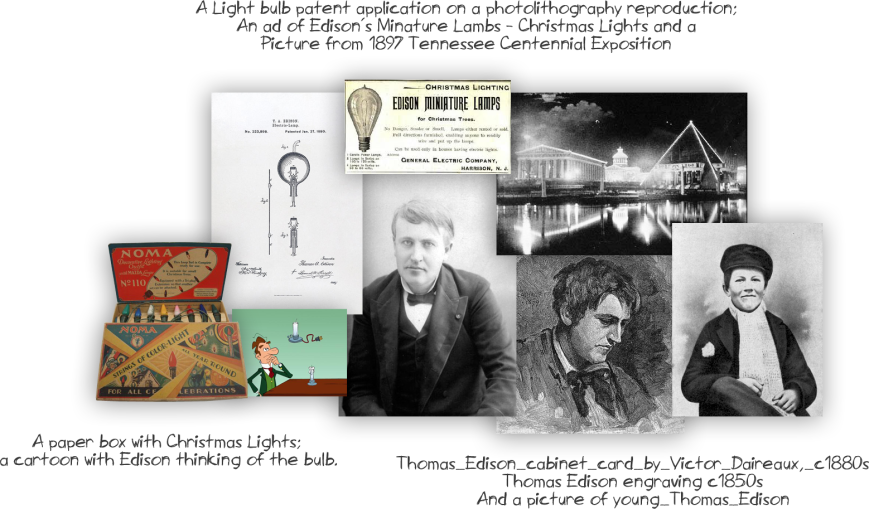 A century and some years ago, Christmas lights were an extravagance item! They were equivalent to Tiffany windows and Faberge eggs, mainly due to the high price of electricity. Some estimation put the cost of lighting a Christmas tree at $2,000 in today’s dollars. The public could enjoy the lights, but only at a distance.

A visitor in the mansion told Detroit Post and Tribune paper the following: “all encased in these dainty glass eggs, and presented a most uncanny and picturesque aspect; the result was a continuous twinkling of dancing colors—red, white, blue, white, red, blue – all the evening, like the tree laden with lambent splendor that sparkles above the fountains in Aladdin’s palace. I need not tell you that the scintillating evergreen was a pretty sight – one can hardly imagine anything prettier.”

Of course it would be couple decades later before Christmas tree lights became affordable for ordinary Americans.

Well, sometimes it is a lot of work, but the Christmas lights have to be finally up!!!

On 19 December 1843 a novella by English author Charles Dickens published by Chapman & Hall. This was A Christmas Carol!

Everyone knows the story that tells of sour and miserly Ebeneezer Scrooge’s conceptual, ethical, and emotional transformation resulting from supernatural visits from Jacob Marley and the Ghosts of Christmas Past, Present, and Yet to Come. The novella met with instant success and critical acclaim.

The book was written and published right on time when in early Victorian era Britain, was born both strong nostalgia for old Christmas traditions and a beginning of new practices such as Christmas trees and greeting cards.

Dickens’s sources for the tale appear to be many and varied but are mainly the embarrassing experiences of his childhood, his compassion for the poor, and various Christmas stories and fairy tales. A Christmas Carol remains popular until today, has never been out of print, and has been adapted to film, stage, opera, and other media multiple times.

Dickens’ Carol was one of the greatest inspirations in revitalizing the old Christmas traditions of England. It brings to the reader images of light, joy, warmth and life and at the same time it brings strong and remarkable images of darkness, hopelessness, coldness, sadness and death. Scrooge himself is the personification of misery but is followed by the renewal of life, so too is Scrooge’s cold, pinched heart restored to the innocent goodwill he had known in his childhood and youth.

A Christmas Carol was published 27 years before the author’s death. When Dickens died on June 9, 1870, his obituary in The New York Times said “He was incomparably the greatest novelist of his time.”

We get into festive spirit with the most famous Christmas book of all time!

Today on December 16, in 1770 a German composer and pianist that became the most crucial figure in the history of music was born. This was Ludwig van Beethoven!

It’s really hard to describe the life and work of this enormous musician and composer in just a couple of paragraphs. So we just write a few very generic words about him.

Beethoven was the grandson of Lodewijk van Beethoven (1712–73), a musician who came from Mechelen in present-day Belgium who moved at the age of twenty to Bonn. So Ludwig was born in Bonn, then the capital of the Electorate of Cologne and part of the Holy Roman Empire. He displayed his musical talents at an early age and was taught by his father Johann van Beethoven and Christian Gottlob Neefe. During his first 22 years in Bonn, Beethoven intended to study with Wolfgang Amadeus Mozart and befriended Joseph Haydn. Beethoven moved to Vienna in 1792 and began studying with Haydn, quickly gaining a reputation as a virtuoso pianist. He lived in Vienna until his death. During the late 18th century, his hearing began to deteriorate significantly, yet he continued to compose, conduct, and perform after becoming completely deaf. 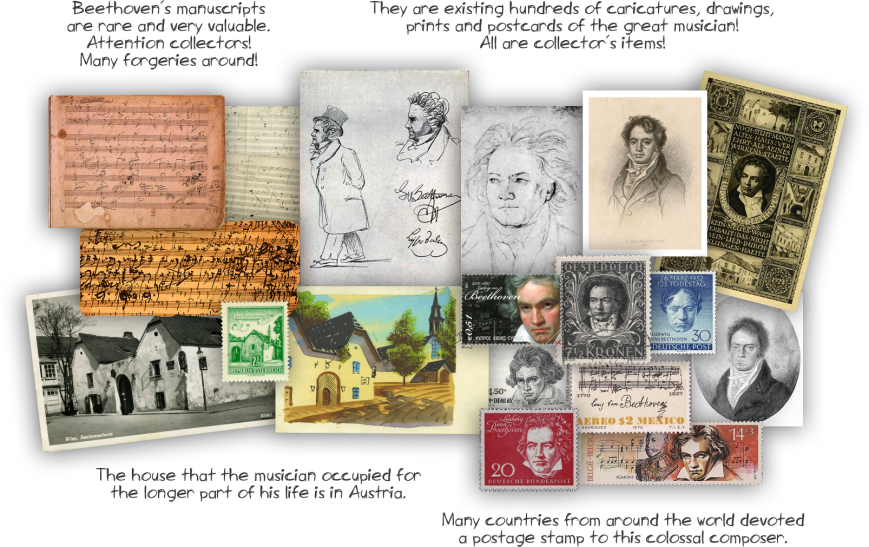 He died on 26 March 1827 at the age of 56 during a thunderstorm. His friend Anselm Hüttenbrenner, who was present at the time, said that there was a peal of thunder at the moment of death. An autopsy revealed significant liver damage, which may have been due to heavy alcohol consumption. But there is dispute about the cause of Beethoven’s death.

Everyone now probably sings inside him the scope from the fifth or the ninth symphony. Well… after almost 300 years his music power still exists!

On 15 December, in 1832 an extraordinary French civil engineer and architect was born: this was Alexandre Gustave Eiffel.

Eiffel was a graduate of the École Centrale des Arts et Manufactures of Paris, and he made a name with various bridges for the French railway network, most famously the Garabit viaduct.

He is best known for the world-famous Eiffel Tower, built for the 1889 Universal Exposition in Paris, France. The design of the Eiffel Tower was originated by Maurice Koechlin and Emile Nouguier, who had discussed ideas for a centerpiece for the Expo. And since May 1884 that Koechlin, working at his home on an outline drawing of their scheme until the beginning of 1886 very little happened. On 12 May of the same year a commission was set up to examine Eiffel’s system and its competitors and on 12 June it presented its decision, which was that only Eiffel’s proposal met their requirements. After some arguments about the exact site for the tower, a contract was signed on 8 January 1887.

The tower had been a subject of some controversy, attracting criticism both from those who did not believe it is feasible and from those who objected on artistic grounds and looks.

But before that, in 1881 Eiffel was contacted by Auguste Bartholdi who ha a need of an engineer to help him to realize another huge order, this time from the other side of the Atlantic, the Statue of Liberty. Eiffel was nominated because of his already involvement with wind stresses. Eiffel invented a structure consisting of a four-legged pylon to support the copper sheets that they made up the body of the statue. The entire statue was created at the Eiffel works in Paris before being pull to pieces and shipped to the United States.

Eiffel is a star through his extraordinary engineering works he accomplished in his time. This tower finally became the symbol of Paris and a huge touristic attraction for the whole France! Let’s go to the top guys and gals!

Giovanni da Verrazzano (1485–1528) was an Italian explorer of North America, in the service of the French crown. He is well-known as the first European since the Norse expeditions to North America around AD 1000 to travel and explore the Atlantic coast of North America between the Carolinas and Newfoundland, including New York Harbor in 1524. The bridge over the opening of New York harbor is among his several eponymous tributes.

Verrazano-Narrows Bridge was conceived nearly a century before it was built. An article in the Richmond County Gazette in 1869, prophesied the day was not “far distant when a bridge will be built across the Narrows from the lighthouse to Fort Hamilton in Long Island.”

But the bridge’s truss is erected in 1963. The final price tag for the 2.2-mile-long span – at the time, the largest suspension bridge in the world – was placed at $32 million.

In August 1964, the upper deck of the bridge was paved, and as today, on November 21st 1964 the bridge was officially opened to the public. On Nov. 23, the Post Office issued a commemorative stamp featuring the Verrazano-Narrows Bridge.

You can find a lot of paper memorabilia about the bridge; accurately about any bridge! There are many collectors with bridge thematic collections of stamps, art, postcards or engravings!

Charles I was the King of England, King of Scotland, and King of Ireland from 27 March 1625 until his execution in 1649.

Charles was born in Dunfermline Palace, Fife, on 19 November 1600. Charles was accused of treason against England by using his power to pursue his personal interest rather than the good of England. So, the King was declared guilty at a public session on Saturday 27 January 1649 and sentenced to death. The execution took place at Whitehall on a scaffold in front of the Banqueting House. I’m sure you’re capable enough to find some of the King’s paper items!

On the other side of the Atlantic, in the same exact date – well some centuries later – TIME magazine on 19 November 1928 presented its cover in color for the first time. The subject was another monarch: Japanese Emperor Hirohito.

Hirohito, officially called in Japan Emperor Shōwa, was the 124th Emperor of Japan according to the traditional order, reigning from December 25, 1926 until his death in 1989.

You can find a lot of paper items original or reproductions on these two topics. Well, probably not Charles I manuscripts but you can make it for the TIME magazines! 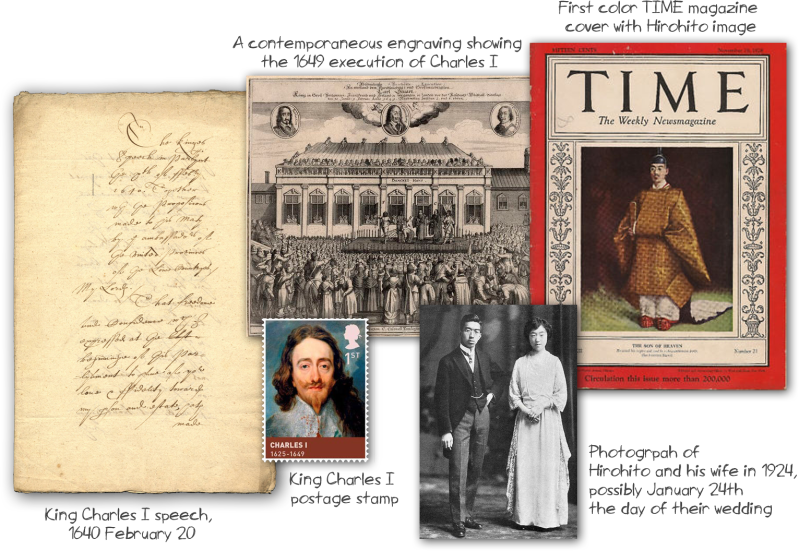