Having read and reviewed (and thoroughly enjoyed) the recent Moon Knight #1 from Warren Ellis and Declan Shalvey, I was curious to dig through some of my backlog to see if I had any other Moon Knight lying around. To be honest, my knowledge of the night’s greatest detective is cursory at best, having read only sporadic appearances over the last twenty years or so. However, when I came across Moon Knight Special Edition #1 I knew it would be fun to review now. Published in October 1992, this special edition one-shot, complete with a cover gallery and mini-comic, falls more in line with what I’d read of the character growing up, albeit in a far more joking tone. So if you’re looking for a nostalgic dose of 90s Moon Knight, look no further.

Written by character creator Doug Moench with pencils by Art Nichols, Moon Knight Special Edition #1 follows the titular character as he teams up with martial arts master Shangi-Chi. Tasked with investigating a series of disappearances, this unlikely pair finds themselves embroiled in the strange world of the Golden Dawn mind-cult, which preys on young adults from their lair on a remote island. Populated by wave after wave of cartoonish, over-the-top obstacles and villains, the island and the cult that runs it are not exactly what they seem, much to Moon Knight’s growing frustration. The plot itself is as ridiculous and cheesy as the cult itself, but the long-suffering heroes are aware of it the entire time, putting much of the aggressive inanity into a sufficient context. Even for it, the conclusion feels a bit rushed and unresolved, adding a level of sobriety at the end that feels a little tacked on. 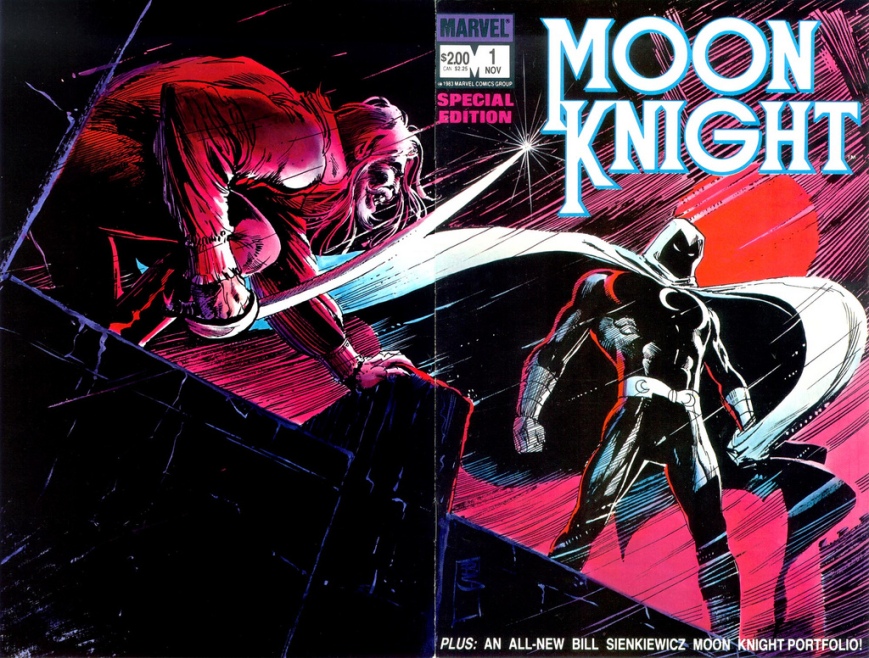 Despite the somewhat uneven handling of the script, Moench injects some great dialogue into this overly silly romp as Moon Knight and Shang-Chi try to get along for the sake of the mission. Much of their strained dynamics result in some truly funny moments throughout the issue, adding some much-needed humor to the story through useful tension and expert delivery. The buddy movie sensibility definitely works to ground the issue in defined characterizations and narrative voices, following the heroes as they grow to eventually tolerate each other and their opposing styles.

As for the artwork, Nichols’ clean page design and kinetic panel compositions carries this zany adventure to a satisfying end. As silly as the graphic narrative becomes, much of the imagery is compelling and visually interesting, making for a solid reading experience. The palettes of colorist Mike Thomas feel a bit muddy at times, especially during action sequences where character detail easily fades into dark amorphous backgrounds. Even for these rough spots, overall the colors are clean and effective throughout. The cover gallery and mini-comic are amusing and definitely worth a look.

While the tone of book is a little inconsistent, the clever dialogue and strong artwork of Moon Knight Special Edition #1 make for an entertaining read. It’s classic exaggerated 90s comic book fare with all the nostalgia, both good and bad, along for the ride. Issues like this are worth revisiting after books relaunch if only to see how many directions characters have gone over the years, from serious to silly and back again. This may not be the strongest example of Moon Knight, but it’s a fun revisit to the bygone days of my childhood.